As promised I will be bringing back some of the better posts from my old blog.  Here is one I have thought about often and would love to hear your comments.  Add them below to the post.  Here is the original post from 06/07/09:

Watching the Brewers play the Braves this weekend is kind of a tough mental exercise. On one hand are the Brewers, my home team and favorite team. The only team I have known. On the other side are the Braves. My second favorite team and the romanticized Milwaukee club of the past. Every time I watch these two square off I wonder if Milwaukee will lose the history of the Braves. Thirty years from now, will Brewer management still recognize the remarkable team from the past? I sure hope so. It also makes me wonder, what if? What if in 1964 or 1965 Selig and others would have realized the fight was lost but asked for one concession, keeping the Braves name and records? Back then, nobody asked for this type of thing. Now it is more common, like the Cleveland Browns. The ownership probably would have gladly agreed as long as they could get a quick exit to Atlanta.

Milwaukee would have still lost baseball for five years but in 1970 when Selig returned baseball to Milwaukee we could have been the Braves again. Now it's impossible, the name is forever with the Atlanta club and the Brewers have their own history, although still without a title. I love the Brewers but honestly would change the name in a heartbeat if we could. The Braves name in Milwaukee evokes such great history, a world championship, and thirteen straight winning years.

What would you choose, the Brewers or Braves in name only? 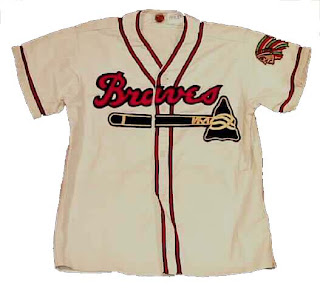 Posted by iFreebies at 5:17 PM

This is the new blog to www.milwaukeebraves.info. All posts on this blog are are copyright ©Keith Bell. Please do not copy, download, or use without permission.